Read this in The Manila Times digital edition.

“I grew up in a poor family,” said Rhia Luz, a nurse in Phoenix, Arizona, who also hosts Buhay-buhay sa Amerika online radio, midway through her interview with the Commission on Filipinos Overseas (CFO).

“You see, my mother was widowed at 34, and was left with 7 mouths to feed, the youngest being me, who was but a baby of only eleven months. Mother only had schooling up to the 3rd grade, and at first, the only skill she had was farming. So you can just imagine me as this dark-skinned girl with low self-confidence, because you could not afford to glam up when you are poor. You have to eat first before anything else.”

“As a kid, I’ve always dreamed of becoming a radio host,” continued Rhia. “When we were growing up in Prensa, Marilao, Bulacan, our family only used radio. Scimatar, Tia Dely… I grew up with these radio programs. But I didn’t think my voice was fit for radio, and since I had low self-confidence back then, I never, in the slightest, considered myself pretty enough to ever land a job on television or radio someday,” she chuckled in self-deprecation.

“But in my heart, I wanted to bring inspiration to people. I think the media is a good way to influence people towards goodness if used in the right way.” 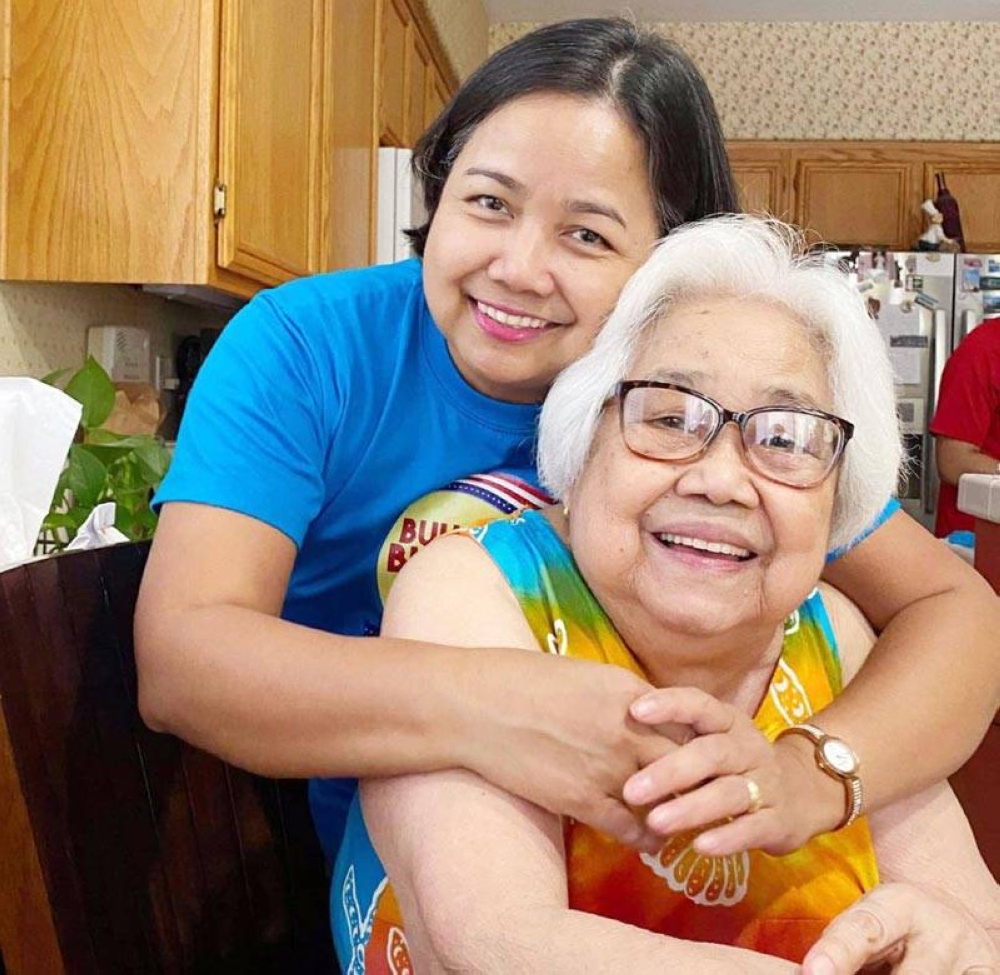 Rhia Luz with her heroine—her mother

Asked how she ended up in radio after all, she first narrated her choice of the nursing course for college. “At that time, almost all opportunities abroad were in the medical field and, well, I love serving people. My sister, who was already living in California then with her US Navy husband-our former neighbor in Marilao- recommended that I take up nursing. So I did.”

“I graduated from Arellano University in 1990. Right after college, I became a missionary. After I passed the board exam, my first work experience was at the F. E.U. Hospital. Then I had to pass the CGFNS exam and thereafter, sought employment in the States. One of my batch mates went ahead of us to the U.S.; she invited us to find employment in Chicago through a recruitment agency for nurses. That was 1993. My first job was in a nursing home. I have been in America for the past 28 years, and I am still a practicing nurse, managing my time between that and my online radio show.”

It was in Chicago that she first settled with her husband, an African she married after she got her green card. But it was their church congregation that petitioned him to America. In 2006, when her husband got a job as a radiologic technologist at the Phoenix Children’s Hospital, they moved their family of 3 daughters to Arizona.

When she got to Arizona, she didn’t want to feel homesick again as she did when she first came to the US, so she plunged into the whole bit of assimilating into her new environment. To start building friendships within her community, the first thing she did was to help some Filipinos who came to Arizona as hotel workers. “Many of them needed food. So, I let them come to our house for dinner and then we would have fellowship.”

She kept this up for 9 more years until she became the Chair of the Women’s Federation for World Peace (WFWP) in Arizona in 2015. In 2016, Arizona was recognized as the Exemplary Chapter at the National Convention of the WFWP. The following year in 2017, Rhia was challenged to bring a National Celebration of WFWP’s 25th Anniversary to Arizona. That paved the way for collaborating with Latina online radio hosts, who allowed her to be on their shows to promote the silver anniversary.

On the 5th time she guested at Entremujeres Radio, she no longer felt shy and so she suddenly found herself pitching to the producers the idea of a Filipino radio show, as there was none to speak of back then. A month passed, and much to her delight, they agreed. “I almost couldn’t believe it, as I have no work experience of radio hosting whatsoever! I started with a six-month contract beginning August 7, 2017. That contract has long expired, and we’re still here, going 4 years [as of this interview], with no further need to sign new contracts.” 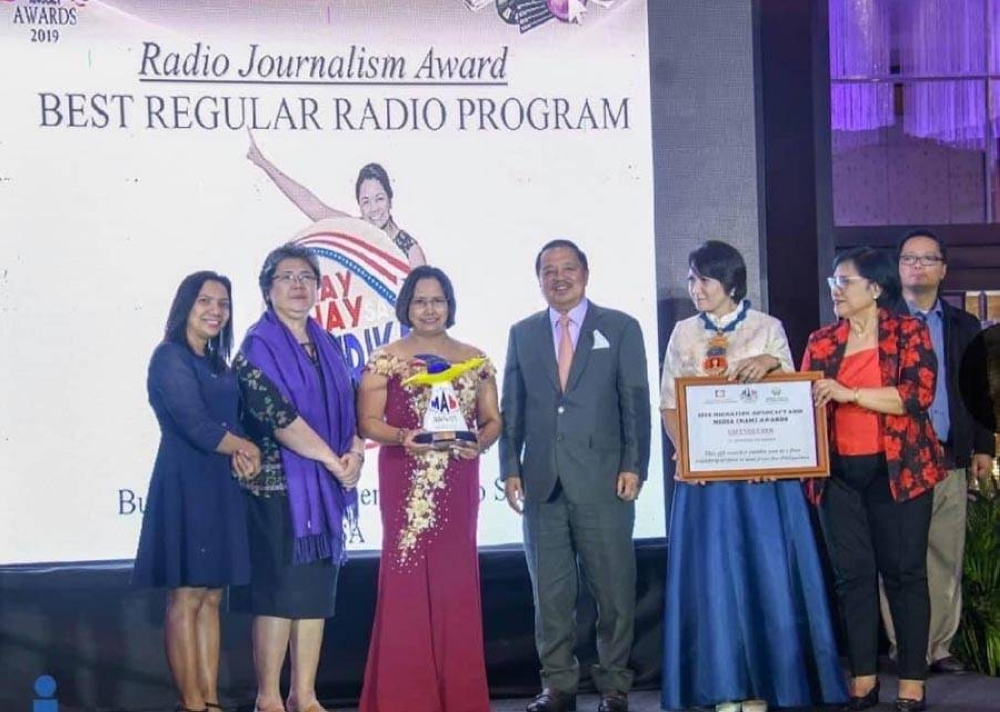 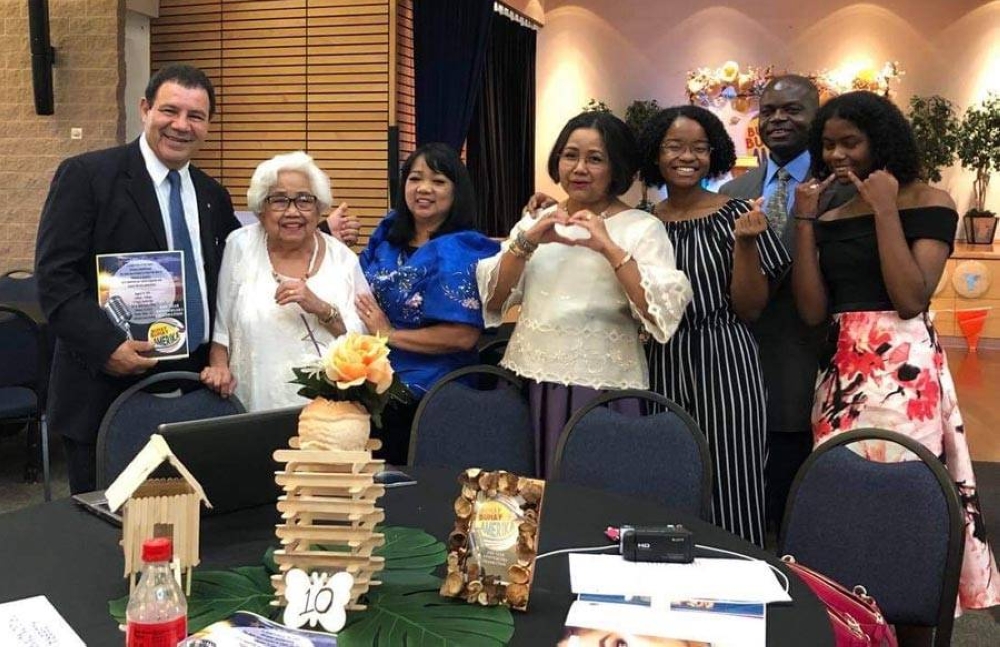 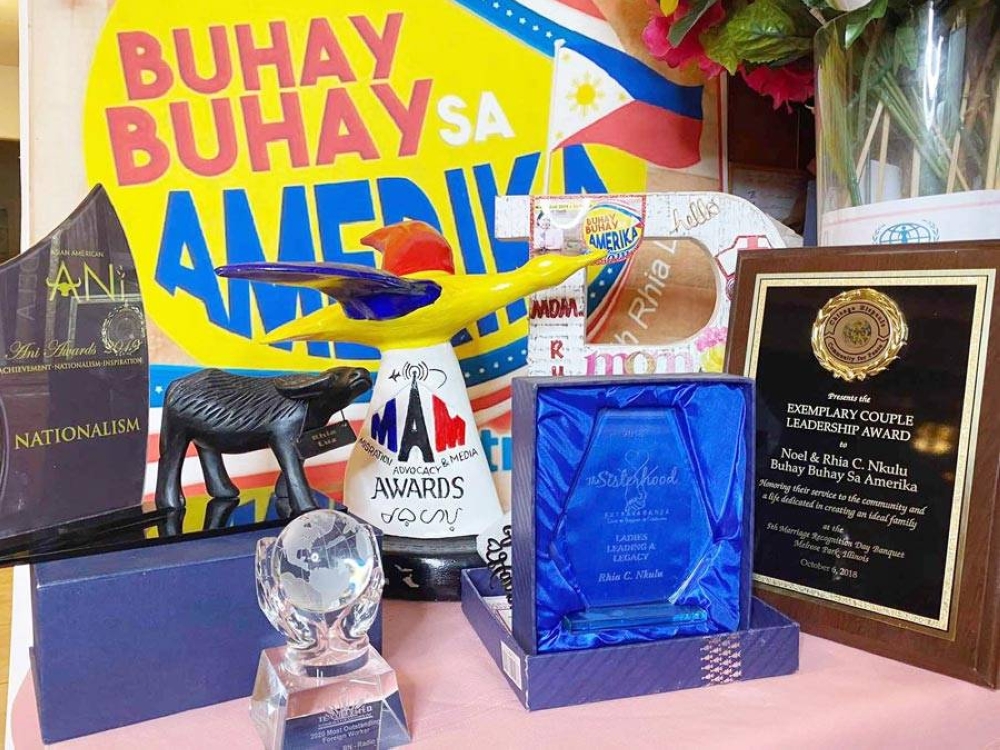 Happily recalling her first show, she continued. “Our first show featured the beauty queens of Arizona. Miss Arizona 2017 was Maddie Rose Holler, who is of Filipino-American descent. It’s almost our anniversary soon, so this interview with the CFO is an anniversary gift for us. That is the story. And every show, before we begin, together with my guests, we pray together. We can be used as God’s instrument to inspire the least of our fellowmen. Because I don’t have the talent, I don’t have the education to be a radio host, it is only my faith and my desire to inspire that brought me here.”

Rhia Luz and her Buhay-buhay sa Amerika online radio show won the Best Regular Radio Program on Migration category of the 2019 Migration Advocacy and Media (MAM) Awards organized by the CFO. When asked if she had plans of spreading the show’s wings outside the US, she readily replied, “If God is telling me to do something to reach out and be of help to more people, why not? I have thought about it, yes, as I have become bolder since I survived breast cancer in 2016. Back then, when things were uncertain and I was in a dark place, who’d have thought that the year after, my childhood dream to be a radio host would actually come true? So when I signed up with Entremujeres, I would often joke around that ‘I lost my breasts, but I found my voice.'”

And that voice she uses now to promote goodness about anything and everything Filipino. For starters, she always wears something Filipino on her show. She talks about issues that concern Filipinos living in the US, such as homesickness, especially for the newly arrived immigrants. “You can take Filipinos away from the Philippines, but you cannot take the Philippines away from the Filipinos. The heart of a Filipino will always long for things Filipino.”

Observing that second-generation Filipino-Americans “look too Filipino to be American” yet “act too American to be Filipino”, she began promoting cultural dances, songs and traditions on the show. “Our show anniversary is celebrated like a Filipino fiesta here in Arizona, with more than 500 people in attendance and everybody wearing Filipiniana. That way, we get to show our 2nd generation kids what Filipino culture is all about.”

Asked how her mother is now, she replied, “She goes back and forth here and California, at my sister’s. She will be 87 on August 31. When we were kids, she did everything. There was no day that her hands and feet were not wet or not buried in mud. Later on, she learned how to cook rice cakes and became the best maker of bibingka, suman and sapin-sapin of our town. That is how she raised us, which later on, enabled her to put up her own little store of rice cakes. If you have the time, please check out Aling Roming’s Sapin-sapin on FB. I created that page to honor my mom, because ‘What you sow is what you reap.'”

Indeed. By always putting her heart in the right place, Rhia Luz’s dream found her, against all the odds.